A native of Serbia, residing in Belgrade and sometimes in Paris, Dragan Mihailovic has always travelled in the best of worlds, that of his imagination !
Through his paintings, we discover this world, made of little corners of paradise.
A born talent !
In childhood, Dragan found inspiration in the beauty of the changing seasons, the first snows of winter and their disappearance, the contrasting colours of the blue sky and the orange of the pumpkins growing in the surrounding fields.
« In my youth, I lived in the countryside. I ran in the fields of corn and pumpkins where the sheep and cattle grazed. I absorbed these scenes, so that they are still alive in my memory. »
His imagination is completely inspired by these Serbian landscapes, inhabited by the hardworking countryfolk. « Each time I saw a new landscape, I imagined how it would be painted and I wanted to keep it, record it among my sketches » Very early, sketching, water colours and gouache painting become part of his life. Spontaneously, his paintings integrate the typical scenes of this corner of Serbia where he was born. His surroundings had marked him. Literature also proved to be significative in his creativity. « The books I read in my youth allowed me to travel the world in my imagination ».
His biggest journey, however began when he arrived in Paris for the first time at the age of 22. Quite by chance, Dragan met some Serbe painters in Montmartre. « They naturally asked me if I knew how to paint, and I replied spontaneously, that yes, I did « Straight away, he started painting and the small easel he was lent, has become his faithful studio compagnon eversince.
The first time
Dragan exhibits his first painting in December 1973 on the Place du Tertre in Montmartre. Being self-taught, he paints in the naive style the authentic scenes from his fertile imagination that have stayed imprinted in his memory of his native land. Very soon, the expert eyes of art connoisseurs are charmed by his talent. His dream of selling his work in the important galleries suddenly becomes a reality. To his joy he finds his paintings are exhibited in the Galerie Mona Lisa and the Galerie 93 in Paris. At this moment he starts to participate in the exhibitions of the Salon International d’Art Naif (SIAN) and the Salon des Independants at the Grand Palais.
It was during a visit to Paris in 1984 that Jeannine Blais Director of her Gallery in North Hatley, Canada, was marvelled by Dragans paintings. She can remember saying to herself that she just had to have his paintings, and so it was arranged.
The first of Dragans paintings in Quebec were therefore shown at the Jeannine Blais Galerie and have since been on regular show. It was five years before the well known Galery owner and the painter actually met.
Dragan will always remember that month of May in 1989 when he set his foot in Quebec for the first time. « It was a beautiful day and I remember that the landscapes were magnificent » Since that moment he has stayed attached to this part of the country.
Though he is now famous and in great demand in other parts of the world, Dragan always finds time to visit his Quebec friends each year. As Estriens, we are priviliged to be able to admire some of his paintings which are on permanent exhibition in North Hatley.
« Dragan is a Naive art painter » says Jeannine Blais « but it is a sophisticated form, a naive of dreams. His paintings are far from being painted in a naive manner, they are more fairy-tales ! He has a very serious approach which transpires through each detail of his depiction of these scenes of paradise. His talent cannot be explained, it just lives in him, and he lets us share his visions through his soul reflecting paintings. »
Dragan does paint in a very disciplined way, but for him it is a real pleasure. « I feel as if I’m on holiday since I sold my first painting 36 years ago ! I never tire of painting. »
Dragan never leaves Belgrade without his brushes. Painting is such a passion anchored in him, it has become a real need. He is definately a born painter and
it will be long, before he will stop amazing and intriguing us by his touching and inspiring works .
Translated from the article by Stephanie-Elizabeth Le Sieur
http://dragan.rs/ 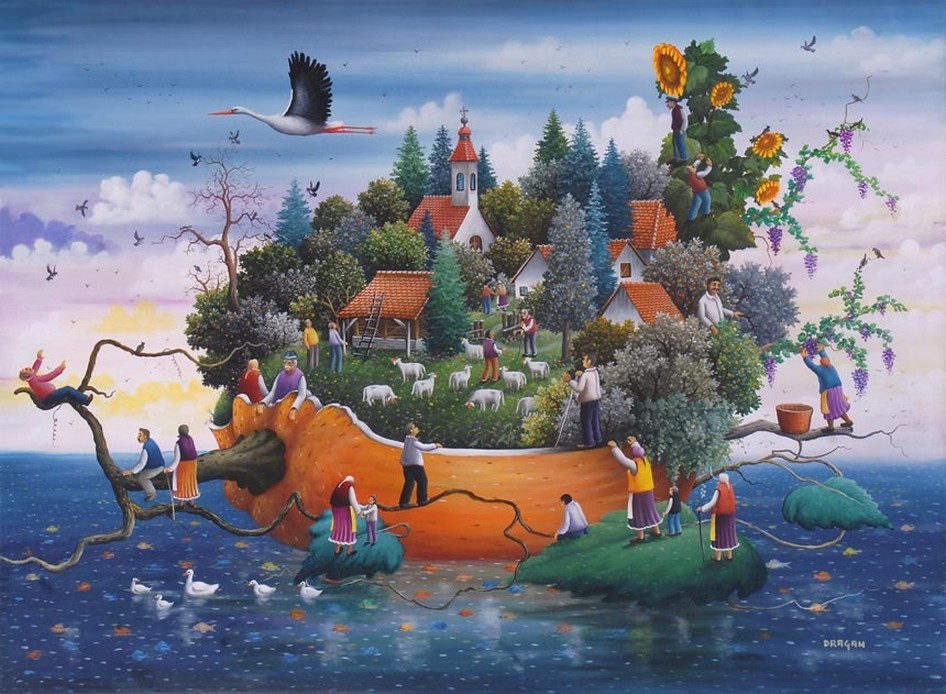